Today Ford Motor Company and the United Auto Workers agreed to a new four-year contract that will add $6.2 billion of investment to U.S. factories, and a close look at the details reveals some news about the upcoming 2013 Shelby GT500.
There has been much speculation about what engine will be used in the next generation Shelby. Back in March Car and Driver reported that the new GT500 would pack more than 600 horsepower to one-up the new Chevrolet Camaro ZL1. At the time it was thought the increase in horsepower would come via an increase in displacement to 5.8-liters and that the Eaton M112 supercharger would be replaced with the newer and larger TVS2300 unit. A few months later a batch of photos of a GT500 test mule with an extra larger intercooler testing at the Nürburgring in Germany sparked speculation that a twin-turbo V8 would possibly be the new power plant.
Now Ford’s new agreement with the UAW shows that the initial report of a 5.8-liter supercharged V8 was indeed correct. The contract states that the Romeo Engine Assembly Plant will receive a $50 million investment and start production of a 5.8-liter supercharged V8 when the 2013 Shelby GT500 goes into production next year. The plant will also continue the production of the 6.2-liter V8 found in the Ford F-150. 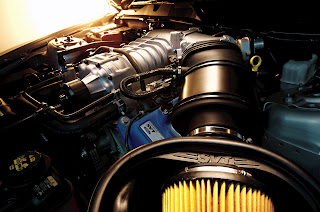 In other news, the contract also shows that the AutoAlliance International Assembly Plant, which produces the Mustang, will receive a $555 million investment and take on production of the next generation Ford Fusion in place of the Mazda6.
Posted by Patrick Peterson at 8:47 AM