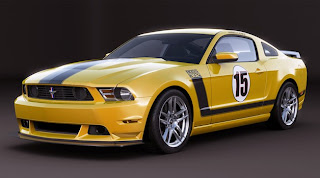 Eleven years ago, Ford designer Melvin Betancourt suffered a serious heart problem and had to undergo intense open-heart surgery at the Henry Ford Hospital in Dearborn, Michigan. The surgery was a total success, with Betancourt crediting Henry Ford's doctors with saving his life. Now, the designer uses his expertise as a way to give back to the medical field that helped give him a second lease on life.

This special edition 2012 Mustang Boss 302 Laguna Seca has been done up as a modern interpretation of the famed coupe Parnelli Jones raced to victory in the 1970 Trans-Am Championship. Painted in School Bus Yellow and complete with black accents and number decals, the Boss will be auctioned off at the Get Your Heart Racing benefit on October 15. The benefit is sponsored by Ford Motor Company and the Henry Ford Health System and raises money for cardiovascular care, research and education.

Posted by Patrick Peterson at 3:57 PM