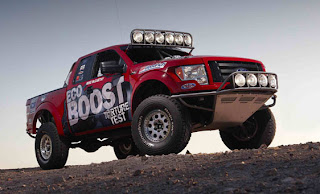 An F-150 EcoBoost™ race truck, with an engine that has the equivalent of 10 years of rugged use, finished the grueling Baja 1000 in just over 38 hours, traveling 1,061 miles. This same stock EcoBoost engine has endured the equivalent of 150,000 harsh user miles on the dynamometer, was installed into a new 2011 Ford F-150 to work as a log skidder in Oregon, towed a 11,300-pound trailer at a high-speed NASCAR track and beat the competition in a steep-grade towing contest at Davis Dam.
The Baja 1000 represented the culmination of the F-150 EcoBoost torture test program, demonstrating the durability and capability of the class-leading 3.5-liter EcoBoost truck engine.
The 3.5-liter EcoBoost engine used to power the race truck performed spectacularly in the harsh terrain and extreme temperature swings of the Baja California Peninsula. The truck endured hard accelerations – often at full throttle – and stiff decelerations across the mountains at temperatures that swung between freezing and 100 degrees Fahrenheit.
Though the EcoBoost engine entered the race with the equivalent of 10 years worth of rugged use, its inherent performance advantages – twin turbochargers and direct fuel injection – helped it complete the race.
“I’ve never seen anything like it in a stock engine – especially one that’s been through what this one has,” said driver Mike McCarthy. “This EcoBoost engine didn’t miss a beat. It took a beating and kept right on going. This is one tough engine.”
The engine that powered the race truck goes next to the Ford powertrain laboratory for a teardown and inspection.
The EcoBoost truck engine produces a best-in-class 420 lb.-ft. of torque at 2,500 rpm and 365 horsepower at 5,000 rpm. Up to 90 percent of its peak torque is available from 1,700 rpm to 5,000 rpm, which helps drivers stay in the power.
“The Baja 1000 is always a tough race, and many of our customers and enthusiasts saw this event as the ultimate challenge,” said Eric Kuehn, chief engineer of the 2011 Ford F-150. “It was an outstanding opportunity to showcase the 3.5-liter EcoBoost truck engine’s durability. We took an engine that’s stock and essentially 10 years old, and raced on the same course with highly modified competition with up to 800 horsepower.”
Posted by Patrick Peterson at 9:59 AM No comments: