For Every Performance Vehicle Owner

I think this should be standard equipment!! 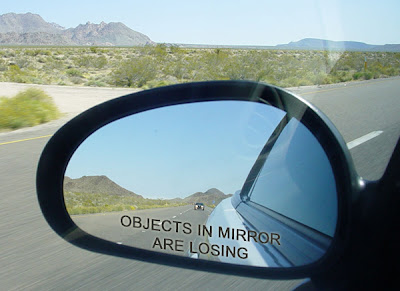 Posted by Patrick Peterson at 10:09 AM No comments:

So Anderson Ford here in little ole' Clinton finally got a Taurus and, while it's not the SHO I've been waiting for, it at least is the color I'm wanting (candy red metallic). It's an SEL with the only option being SYNC. I went in this afternoon to take it for a spin as this will be my first time seeing the car in person, let alone sitting in the car and "test fitting" it.

In the name of full disclosure, I'm a big guy. About 6'4" and well north of 350 lbs. My current daily driver is a 1994 Crown Vic and I own two Mustangs (1990 and a 1978) and my wife drives a 2007 Lincoln MKZ. I fit in all of the cars fairly well with the MKZ being slightly tighter being that my right knee rests right on the edge of the center stack. It's annoying but doesn't keep me from driving the car on long trips (just got back from Kansas City, MO this week).

Back to the Taurus. The salesman, Patrick, and I head out to the car. I have to say the Taurus, even in "lowly" SEL trim has presence. The character line that runs from nose to tail at the belt line actually continues into the headlight housing; a detail I had not noticed in the photos and was something I impressed with. It would have been easier/cheaper not to continue that detail into the clear lens but nonetheless it's a subtle feature that I think many would be surprised by. Speaking of that character line, I feel it is perfect for the car. It helps to lengthen the body of the car and helps to transition to the taillamp assembly. I also believe if you look back at Ford fullsize cars of the 50's and 60's you would find that same line. I like it.

The fuel door also surprised me in that there is no "finger hole" to open the door. Instead you push on the cover like you would a compartment on a piece of AV equipment and the door pops open. Much classier than the "pull hole" that's on other car and is the same as the 2010 Mustang from what Patrick told me.

So I get in the car. With the seat all the way back, the steering wheel up and in all the way I have plenty of room. Ingress into the car is effortless and easier than my Vic or the MKZ. I was worried about feeling cramped with the way the center console dominates the interior but once settled in the car and the door shut I found the dual cockpit feel very comfortable and inviting. Seatbelt use was easy thanks to seatbelt receptacles that were not buried down between the seat cushion and center console; a lesson I'd like to think the engineers learned from the Fusion/MKZ because those things are buried compared to the Taurus. Head room is an easy 2+ inches (and I've got a big melon for a head). Sight lines out the front glass is large and unobtrusive. IP gauge visibility is perfect. I didn't play with the controls on the center stack although everything was apparently within easy reach. The buttons for the information display (INFO, RESET, etc) were at the very edge of my reach without having to bend forward but I told Patrick I hardly ever use those in the MKZ anyway. He apparently uses the ones in his truck more often and found these a stretch for him.

So I put the car in gear and we leave the dealership. This car is equipped with paddle shifters and I was itching to try them out. We stayed in town at first and I left the car in "D". The six speed shifted excellently and I feel it's strategy has been significantly upgraded compared to the shifting in the MKZ. Often the MKZ hunts for the correct gear ratio around town, something I feel is related to the drive by wire programming and the computer trying to interpret what gear the car should be in. The Taurus exhibited none of this and was always in the right gear at the right time. The 3.5L also had plenty of pickup for the size of the Taurus. I can only imagine what it's going to be like with 100hp more in SHO trim. Sightlines out the back window, something the magazines complained about, was fine. I could clearly see traffic behind me in normal driving and felt no desire for a "larger" sight picture.

I decided to work the manual mode of the transmission and see how it worked. One question I had was how the transmission handled coming to a stop in manual mode (do you downshift it to '1' or does it hold the last gear you're in?). The first "test" was changing from 'D' to 'M' while cruising, like the SHO commercial. Cruising at a leisurely 30mph I dropped it into 'M'. The gear number indicator immediately lit up '4' indicating I was in fourth gear. I use my left thumb to toggle the thumb lever outboard and the transmission immediately downshifts to third with a blip of the throttle. Awesome. I hit it again and we're in second as we approach a stop sign. I leave it in second as we come to a stop. At around the 5-10mph mark the indicator changes to '1', indicating we're in first gear. So the transmission, even in manual mode, is smart enough to know when coming to a stop it should shift back to first gear. Whether this is good or bad, I don't know but it did answer a question I had regarding it's operation. Leaving the stop sign I "let the big dog eat" and ran the engine out to 6500rpm and pulled the left paddle (I'm left handed) to initiate an upshift. I was slightly disappointed in the perceptible lag in upshift timing but when the transmission did shift it was clean and quick. Pulling through second the engine felt very strong and never appeared to run out of steam. The upshift to third was more of a disappointment as the transmission seemed to hesitate between letting go of second and "engaging" third. It could have been the engine speed or it could have been programming, no way of knowing. Resuming a more "legal" speed I clicked the trans back to 'D' and let it handle shifting duties while I focused on driving.

We turned off the highway onto some twisty two lane country roads. I selected manual mode again and took to carving some corners. The Taurus, for being a two ton sedan, was sure footed and solid as I took the car through some tight back country roads. Had the corn been cut I would have been able to easily raise my speeds 10mph or more and apex the turns more effectively but at no time did I get the impression that the car was "un easy" or being pushed too far. The brakes were effective although I wasn't pushing the car hard enough to work them.

We concluded our romp with a quiet, leisurely cruise back to the dealership. The car is extremely quiet and comfortable. I wish I'd had my SHO for my trip to Kansas City I just got back from, it would have made the trip that much more awesome. I love the looks of the car (red is the color to get...maybe steel blue too, it's a toss up).

We ended our escapade talking about the SHO. Turns out only customer ordered cars are being built right now and the fastest way to get one is to order one since after the customer orders are filled, then the dealer allotments will be done. Some dealers have gotten their allotment car(s) already but they said if I want one, ordering it will get it fastest. They said figure 6 to 8 weeks to slot it in from when I order. So, after driving the car today I feel pretty good about placing my order so tomorrow (Friday) I think I'm going in and I'll throw my hat in the ring. I've got my X-plan PIN and I know what I want so we'll see what happens. Long story longer, the new Taurus is awesome and should be a home run for Ford. Drive One.

Originally posted on the Blue Oval Forums website
http://www.blueovalforums.com/forums/index.php?showtopic=34665
Posted by Patrick Peterson at 11:49 AM No comments:

YOU MAY BE A ROUSH OWNER IF...

There are a lot of signs that you might be the owner of a ROUSH®Mustang. Among them:

1. You won’t drive your car in the rain

2. Your "Significant Other" is afraid to drive your car

3. You spend more on tires than food

4. You look inside a police car and see a photo of your car taped to the dash

5. You toss your underwear in the garbage instead of the laundry basket

7. Your exhaust sets off car alarms in the parking structure

8. You spend more time at a gas station explaining about the car than filling up the tank

9. You no longer care that people call it a "ROOSH" or "RUSH"

10. Sundays are spent watching Jack’s NASCAR teams and thinking "I could do better than them if he just would give me a tryout."

11. You celebrate a Roush Fenway Racing victory with donuts in the cul-de-sac

12. You’ll drive hundreds of miles to get a Jack Roush autograph, but won’t go across town to have dinner with the in-laws.

13. The home page on your computer is set to ROUSHperformance.com

14. The dog won’t go for rides in the car anymore

16. Your pets scramble for a hiding spot as soon as the garage door opens

17. Your face looks like the astronauts riding a NASA centrifuge when you hit the accelerator

18. You carry a photo of your ROUSH in your wallet

19. Vacations are planned around car shows and the ROUSH Round-Up
Posted by Patrick Peterson at 10:50 AM No comments: