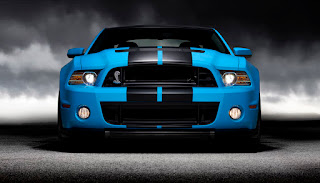 Ford took the automotive industry by surprise when it unveiled the 2013 Shelby GT500 back in November. With its 5.8-liter supercharged V8 producing 650 horsepower and new aerodynamics allowing for a top speed of 202 mph, the new GT500 is unequivocally the most impressive Mustang to ever come from the factory. However, with the next generation Mustang coming in 2014 as a 2015 model, what’s in store for the GT500′s future? Will there even be a Shelby GT500 when the next generation Mustang is introduced? Ford could easily return to using the SVT Cobra name or even go with a completely different moniker.
According to Shelby American president John Luft, though, the Shelby GT500 will continue on as a model well into the Mustang’s next generation. In an exclusive interview at the New York Auto Show last week, Luft told MustangsDaily.com that “the contract [with Ford] has been extended, and we have a long-term vision for our relationship. It has been extended through 2015 and beyond.”
Luft went on to explain that the relationship between Ford and Shelby has been extremely beneficial to both companies. “When something works you just don’t change it,” he said. “Clearly, having a Shelby in their stable as their halo car has really worked for them. Ford Motor Company loves it, their dealers love it, and we love it. It gives us a great platform. So we need Ford Motor Company to develop great base cars.”
According to Luft, Shelby plans to continue to focus on small production runs of cars like the GT350, GTS and GT500 Super Snake and leave the large scale operations up to Ford. “We could never produce the volume that they produce,” he told us. “We’ve sized our business to build 500-600 cars per year. That’s our sweet spot. To ever do another production run like the GT was where it was 6,000 or 7,000 cars, it’s not in our game plan.”