The team will continue to be sponsored by Castrol EDGE. Branding for Castrol's global range of best-in-class motor oils will feature prominently in the Fiesta RS WRC's new livery for the upcoming season, as it did in 2011.

The Fiesta RS World Rally Car, with its four wheel-drive transmission and 1.6-litre EcoBoost-inspired engine will once again spearhead Ford's challenge in the 2012 and 2013 championships. The car, based on the best-selling Fiesta road car, claimed a clean sweep of the podium in both the first and final rounds of its debut season last year.

Finland's Jari-Matti Latvala and co-driver Miikka Anttila, who topped the world rankings for special stage victories in 2011 and won the final round of the championship in Rally GB last season, are confirmed as team leaders for 2012.

They will be partnered by former world champion Petter Solberg and Chris Patterson, who have signed a one-year agreement to drive the team's second Fiesta RS WRC in all 13 rounds. The experienced Solberg won the world title in 2003 and the 37-year-old Norwegian has 13 world rally wins to his name. It will be his second stint with Ford, having launched his world rally career with the team in 1999.

"Both Castrol and Ford have a long standing association with motorsport and have shared great past successes in rallying, a second placed finish in both the drivers' and manufacturers' championships in 2011 being the most recent highlight. The WRC is motorsport's toughest competition for production-based cars, together we will continue to be able to call upon our vast experiences of developing, testing and optimizing the combination of car and engine oil technologies in order to push boundaries and maximize performances.

"The strength of Castrol EDGE, helps to ensure maximum engine performance, and will help give Jari-Matti and Petter the freedom to demand that performance again and again, hundreds of times in a stage."

"We have a great partnership with M-Sport and its leader, Malcolm Wilson, and great technical partners in Castrol. Our strong driver line-up includes Jari-Matti Latvala, recognized as one of motorsport's rising stars. Already regarded by many as the fastest driver in WRC, during 2011 he showed consistency and expertise on all surfaces. We believe he will flourish in his new role as team leader with the Ford World Rally Team, and look forward to seeing his pace light up the special stages around the world.

"The addition of Petter Solberg to the team brings one of the sport's most experienced and flamboyant drivers back to the team where he started his top-level career. A drivers' world title in 2003 and 13 world rally victories are testament to his abilities and his vast experience will be a great asset to our driver line-up."

Malcolm Wilson, team director and M-Sport managing director, said:
"It's great to have Ford onboard as manufacturers again this season and you can see from the new livery how important Castrol EDGE will be again in 2012 as a technical partner. After such a strong performance last year we are really excited about where we can be at the end of the season. With the car and driving team we have, alongside the experience and expertise of our employees at Dovenby Hall, and our partners, I am confident we can challenge for world titles."
By  Noah Joseph 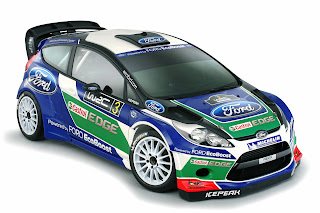 Posted by Patrick Peterson at 2:02 PM