The sexiest Mustang of all has to be the 2011 convertible. 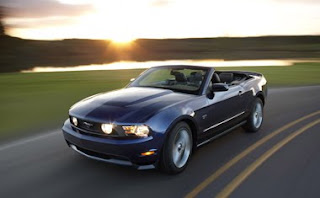 Talk about staying power. It's 2011, and who'da thunk Harrison Ford would still be sexy now that Star Wars is fading history. Or graying but eternally hunky George Clooney. Or Charlie Sheen, who defies being categorized anywhere. (Undoubtedly Steve McQueen would be dean of them all if he'd been around longer.) We recall these examples of seasoned male magnificence to make a point. Like the Ford Mustang, the supreme, most iconic muscle car of them all, they've never left the spotlight. Now the 2011 Ford Mustang convertible proves it's more than perception, as it shows up as fresh and defiant as ever.

Consider this legendary rear-drive pony car that burst on the scene decades ago to be idolized in sporty car circles. Unlike rivals from Dodge and Chevrolet and their subsequent resurrections, it never entered retirement. Instead, a few costume changes ensued before it emerged in pure muscle car mode and hasn't looked back since.

The sexiest Mustang of all has to be the 2011 convertible. There's a whole lot of fire under the hood, spiked by a new 3.7-liter V-6 powerplant that just loves to growl when you throw the six-speed trans into gear. Having the brass to blow the chrome off of dual exhaust tips might not come easy for some vehicles. The "Stang's" 305 HP rating and impressive 280 ft.-lb of torque make that talent a given. But lest you think it's an uncultured beast, it balances that impressive power with refined handling, road-hugging finesse and the coolest profile around.

In the "oops" department, there's one entry. Like most four-seat sports cars, using the rear for anyone taller than doll-size is iffy. For someone "bootylicious," like Beyonce or Scary Movie star Regina Hall, trying to get back there could be really scary. There's something called the law of physics that even Ford can't overcome.

Pricewise, the basic soft top (only) Stang comes in a squeak under $30K. The 19/30 mileage numbers (automatic) or 19/29 (manual) thrive on regular. Adding fuel, like other Ford vehicles, is simple with no filler cap to replace, like a race car. If you've stopped for a big slurp, you and your car can get a fillup a few seconds faster so there's less time for that annoying Camaro or Challenger you passed earlier to play catch up.

Can we envision a Ford, a Clooney, a Sheen mesmerizing Malibu in a sizzling 2011 Mustang? You bet. We think these leading men have the smarts and sophistication to know a true classic when they see one. And one afterthought. Take heart, Justin Bieber, it takes time to become seasoned. With a little luck you can get there too.
Posted by Patrick Peterson at 8:35 AM