Ford gets CES innovation awards for Sync and Work Solutions 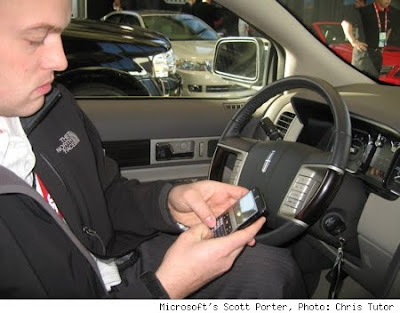 For years, Microsoft founder and former CEO Bill Gates was the keynoter at the Consumer Electronics Show. When Microsoft first announced its intention to create software for cars nearly a decade ago, most people that had suffered through the indignities of the blue screen of death recoiled in horror. The idea of having to close all of our car windows and re-booting our cars became a running joke. While Microsoft's automotive in-roads probably didn't get as far as the company hoped, it does have one prominent application: Sync, one of the most popular options in Ford vehicles in recent years.

With Gates' retirement, Ford CEO Alan Mullaly will be taking on the big keynote in Vegas next January and the Consumer Electronics Association (CES) will honor the automaker for its efforts in developing Sync and the Work Solutions package for its trucks. Ford has continued to expand the functionality of Sync recently adding traffic, directions and general information, as well integrating with Bluetooth phones to automatically call 911 in an emergency. The show organizers have also named the new Taurus as the official car of the 2010 show.

These new capabilities are in addition to SYNC's established hallmark suite of services, from hands-free, voice-activated cell phone and digital media player integration to the more recent security and convenience additions of 911 Assist™ and Vehicle Health Report.

Introduced in 2007, more than 80 percent of the vehicles Ford sells in North America are equipped with SYNC, and more than 1 million SYNC-equipped vehicles are on the road today.
Posted by Patrick Peterson at 8:10 AM