Posted by Patrick Peterson at 9:06 AM No comments: Links to this post

CLOSELY INSPIRED BY THE ORIGINAL '65, IN AN ALL-NEW PLATFORM!

!!THE BEAST HAS ARRIVED!!

The all-new 2016 Shelby GT350 Mustang is a world-class sports car that draws its credentials from it legendary racing roots at Shelby & Ford
Performance Racing Team.   This car was not only engineered to compliment the all-new Ford Mustang design... it was developed to take race
track ready, heart pumping performance to a new level. 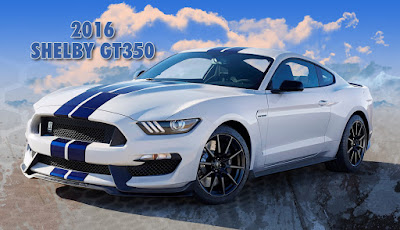 The 2016 Shelby GT350 features a number of unique body components that are engineered to deliver a balance between down force, drag &
cooling. Features are specifically designed to move air in, around and away from the body, the engine compartment, brake rotors and under carriage.
These unique to the GT350 components include: aluminum hood w/center vent, widened aluminum front fenders, front & rear fascia's, front splitter rocker
panels & rear valance w/integrated diffuser.

The 2016 Shelby GT350 is one up on the competition with a track package option that includes: MagnetrideTM damping system, integrated driver control (IDC)
system, raised deck lid spoiler, aluminum tower to tower brace, engine oil, transmission & differential coolers and heavy - duty front springs.  The Shelby
GT350 comes with "Over The Top" racing stripes in blue and a full vehicle cover with Cobra & Shelby logos.
You can check this incredible Mustang out on our Ebay site here:
www.ebay.com
www.anderson-ford.com
www.andersonfordmotorsport.com
www.chassisdynotuningillinois.com
Posted by Patrick Peterson at 8:33 AM No comments: Links to this post