Eleanor Mustang From “Gone In 60 Seconds” For Sale 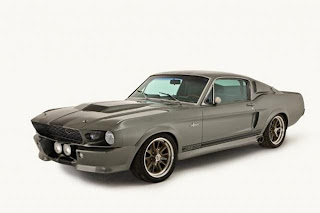 Mustangs have always been popular with Hollywood, and there may not be any other car in the world that has made as many big screen appearances as the Mustang. But some movies merely feature a Mustang; other movies put the American pony car front in center in the action, like “Gone in 60 Seconds,” both the original, and the remake.
To that end, one of the original 1967 Eleanor Mustangs from the “Gone in 60 Seconds” remake will be heading to auction this weekend at the Autosport International Show, in Belgium. The car is being sold by by Coys auction house.
We’re sure the arguments section will soon devolve into an argument over whether or not the remake was better than the original. Whatever your opinion, one cannot argue with the hotness of a blond Angelina Jolie stealing fast cars, nor the beauty of the “Eleanor” ‘67 Mustang. Since that movie debuted, Eleanor body kits have been all the rage among the well-to-do, and who can blame them? It’s a beautiful car, with a beautiful name. And it is now up for auction.
There are a total of ten “Eleanor” Mustangs from the remake going up for auction, though this was one of just three designated as “hero” cars. This particular Eleanor was used for shots with actors, interior shots, action scenes, and so on. Originally powered by a 289, it now features a 331 Ford crate engine. Pre-auction estimates place the gavel-slamming price at between $115, and $155,000, which is probably only a little more than you could expect to pay if you went out and built one yourself.
The question is…would you want it?